We’ve received a lot of questions about the Six-66 ~ let’s answer them!

If you’ve seen the trailer for Little Hellions or have caught us demoing the game at various events, you may have seen this cute little box. 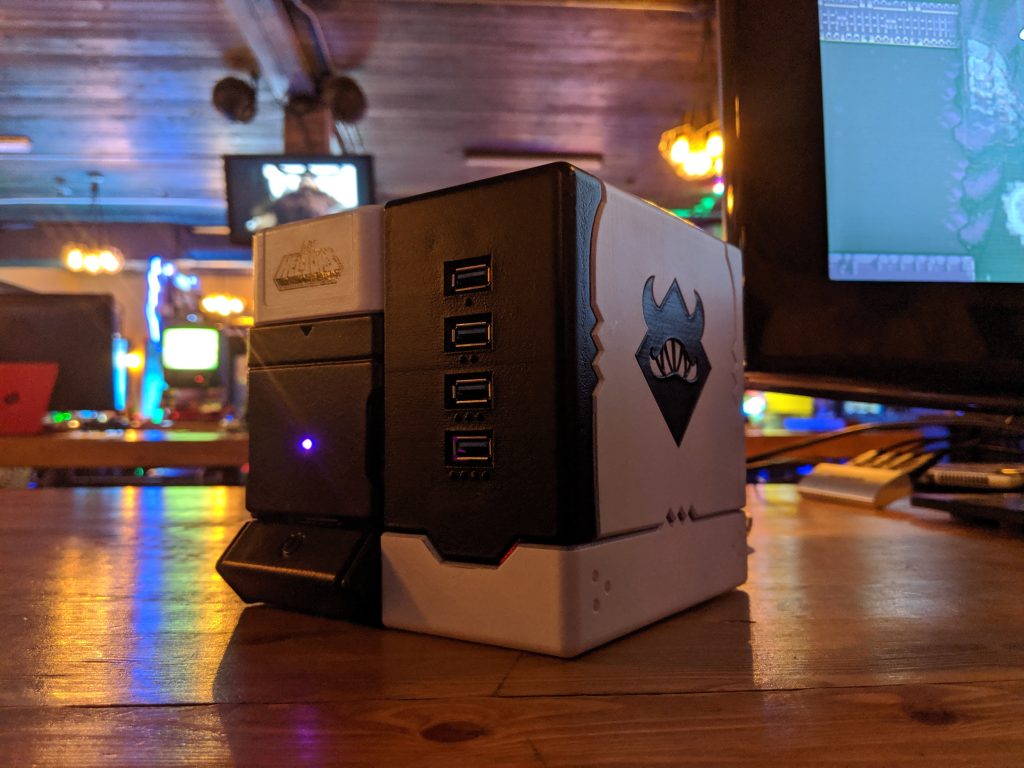 It’s called the Six-66, it’s our custom DIY fantasy console. It’s fully functional and runs our games. It supports advanced technologies like cartridges and wired controllers. It’s one of a kind (and not available for sale). It’s basically Schadenfreude’s mascot.

But … why though? It’s kind of confusing. I can’t buy this thing but the game runs on it?

It’s ok, you’re fine. It’s really not a big deal. You’ll be able to play Little Hellions in the places where games go. But we did this for fun and to see if we could!

Early in development, before we had nailed down our release platform (more on that when it comes), we had difficulty demoing the game in a convenient way. You have to haul around a lot of equipment in order to show a game. It’s a lot. We also didn’t want to give the impression that we were making a PC game. After all, we’d like the game to be available on PC eventually, but it’s not our target for release. So Devon from Violet Games (Little Hellion’s publisher) came up with the idea. “If we can’t say what platform we’re on, why not make one ourselves?”

I’m not particularly savvy with hardware, so I largely focused on the design myself. I wanted something cute and tangentially demonic, kind of encapsulating Schadenfreude were it a real world object ~ with retro sensibilities considering the couch friendly design of our first title. So I began by looking for inspiration – and I found it in the Famicube by Android Arts. It’s a concept for a fantasy console in itself, one exhaustively designed and documented by Arne Niklas Jansson, the person behind Android Arts.

(Their work is exceptional ~ give it a look!)

But I quickly found my concepts much too derivative of Niklas’ work, so I decided to get in contact with him.  After briefly running the idea by him, he was kind enough to give me some feedback and an ‘ok’ on the concept.

I hadn’t really been exposed to the Famicom before seeing Niklas’ work, so I was quite taken by the toy like profile of the cartridges. Knowing all the games I’d like to make after Little Hellions, I decided to include a cartridge slot to sort of future proof the design for showing new games when the time comes.

It was around then that I began discussing production options with a buddy of mine, Arthur Hobden, who is a 3D printing specialist. Over a couple months, we went back and forth as he modeled the console’s shell for us, specifically designing it in printer friendly component pieces. Through this process we unintentionally arrived at several design motifs that would loop back into Schadenfreude as a brand, including the “sawtooth” motif and the use of primarily black and white. 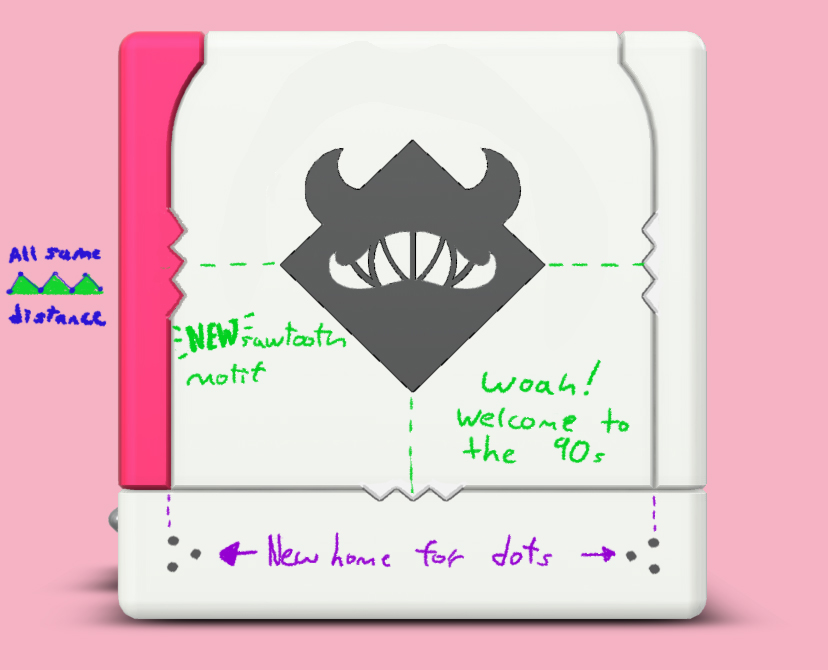 PolyJet printing and painting was done through proto3000. There was a limit to the print quality we could achieve with our budget, but overall, 3D printing was the best solution for our purposes. In retrospect, we probably went a little overboard with just how many parts compose the console ~ it will for sure explode if we’re ever unfortunate enough to drop it. 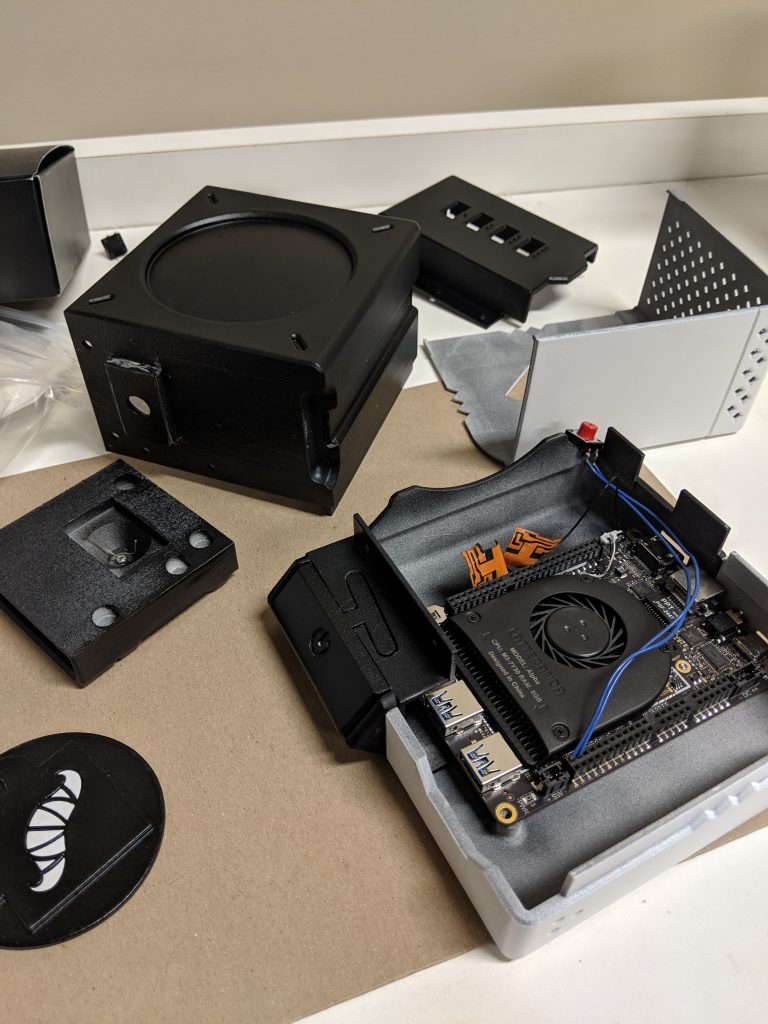 While I worked on the design with Arthur, Devon figured out what it’s guts would look like. Fitting everything within the shell’s silhouette proved to be a challenge, so we settled on using a board not too dissimilar to a Raspberry Pi. The exact internals are as follows:

For the complete list of materials, check out Violet Games’ take on the project.

As for putting the whole thing together, it took the better part of a day. I’d explain how it went, but you can just watch the whole process below!

And that’s it! The Six-66 is an ongoing project that will evolve alongside Schadenfreude. I’m sure it comes as no surprise that we learned a lot while building this first version. We hope that, through gestures like this, we can show that indies shouldn’t feel creatively constrained by their limited resources.

Till next time, keep make’n stuff and eat some pizza or something.